This week we are going to be taking a deeper look into the art of Strange Stars with our lead artist Laura (Instagram/Twitter) . We began art development of Strange Stars early in 2021 with a team meeting to discuss the theme and aesthetic we wanted to create. Having recently released our game Fish Heads the previous year, a game inspired by the cartoon art style of Invader Zim, we wanted to take similar queues from early 2000s cartoons.

“Strange Stars’s early conceptual period followed a style virtually indistinguishable from Fish Heads, however, I was feeling a little burnt out and stuck following the same design choices as before; I’m the type of person to change my style up every three to four months, so, as you can imagine, I was ready for a change myself. It didn’t feel like we were progressing or innovating creatively.” - Laura, Lead Artist.

The first thing we do when we start developing an art style is take a look at existing art that inspires us. For Strange Stars we took a couple of weeks to gather a variety of reference images from the styles that emerged out of the early 2000s cartoon aesthetic. Over the course of those weeks we would have conversations regarding the merits of those references, identifying the features we like or disliked. This allowed us to discover the defining features of the art that we would want to bring into the game.

Laura goes on to explain: “I was inspired by cartoon shows such as My Life as a Teenage Robot and Dexter’s Laboratory for our early development period. When things went a little bit more funny and psychedelic, I recalled some of the great chaos present in some of the less popularly known classics. To me, seeing Jorge R. Gutierrez (El Tigre) reminded me to have fun while drawing. His pieces were so playful and whimsical. You could truly tell he was enjoying his creative work.”

After the reference stage of our development we began with drafting up some concepts. Again, as with the reference phases, we would have a team discussion on which concepts we liked or didn’t like. This would help steer Laura in the direction we felt worked for the game. It was also during this stage that we started focusing on what themes we wanted to focus on for the game; a mix of sci-fi, post-apocalyptic, and cyberpunk themes all have their influences on the art. Additionally, discussions about characters designs for our heroes and villains as well as the overall settings our levels will be taking place in were taking place.

Laura says the following about some of the ways she approached her conceptual design: “There was a “fish eye” type of perspective I started exploring in some of the early concept art that really started to get me experimenting with our style. I tried to exaggerate the angularity and colors of the character, props, and other items in order to create something that was a visual overload, but in the best possible way.”

Once we settled on what concepts were speaking most loudly to us we got to work on codifying the style of our game art. We performed a number of color tests for our characters and the environment. We also spent some time talking about line weights and the color language that we wanted to use when creating the game art. It was important to us to make sure that characters, interactive objects, platforms, and the background were easily distinguished from one another and were distinctively readable.

Laura has this to say about the process: "When we had two art interns underwing, I pointed to games like Samba de Amigo and Jet Set Radio for being so bold and daring in their color schemes. It's always easier to start crazier out of the gate and reel back if necessary than pulling and pulling out of an inspiration well that has dried up.” 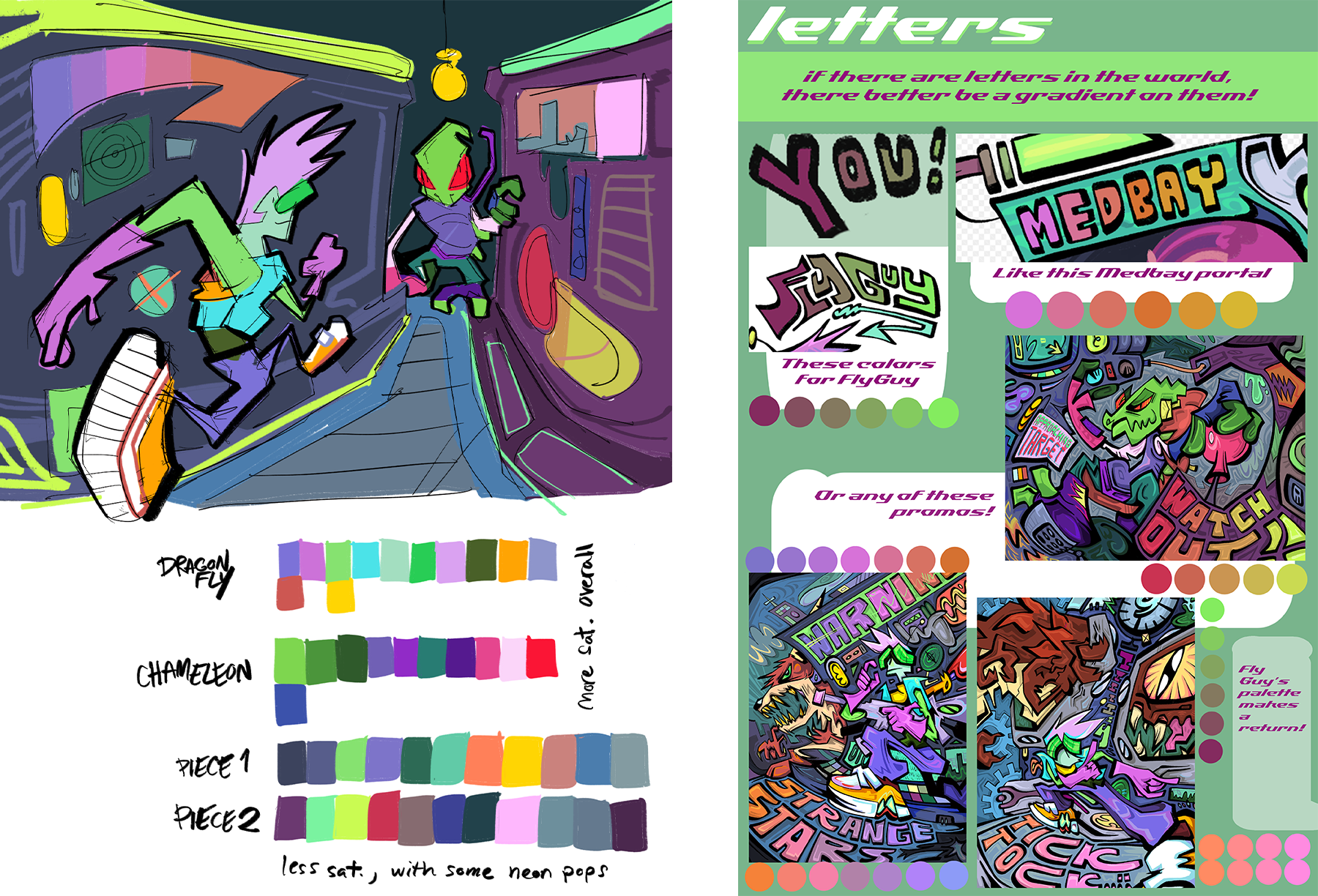 Strange Stars's art style is a synthesis of and evolution on a plethora of inspirations, both within the medium of gaming and out of it. The game's energetic and zany style is guided by a meticulously crafted set of design principles, and driven by a desire to pay homage to its inspirations while expanding on them to chart its own path.